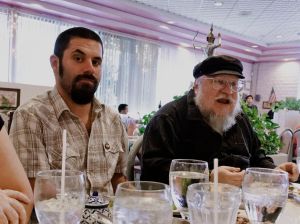 Dallas Taylor is a bartender by trade and a writer by avocation.  Raised in the shadow of Disney World, he fled to Florida’s west coast, where he attended and eventually graduated from New College, a tiny liberal arts school nestled next to the airport in a city-sized retirement community.  He majored in Critical Studies, and wrote a novel draft for his thesis.

Upon obtaining his degree, he migrated to the Rocky Mountains of Colorado.  Very little is known about this period of his life.

Futher peregrinations took him to Seattle, where he settled after realizing he could not get any further from his place of origin without extended bouts of swimming or applying for Canadian citizenship.  He also began, finally, to take his writing seriously, and toiled for most of a decade on a massive project called GoATDaD and the Army of Monkeys, a project which remains incomplete to this day.

In 2010 he applied and was accepted to the Clarion Writers’ Workshop, which changed his life forever.  Since then he has completed the transformation from bartender who writes in his spare time to writer who bartends to support his art, and is much happier as a result.